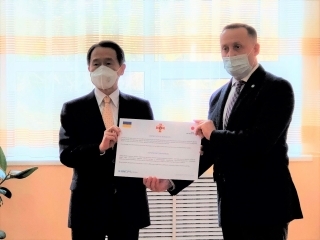 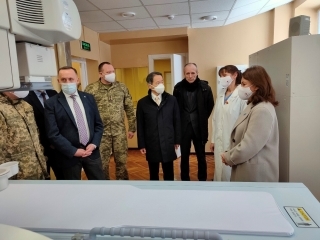 On February 25, Ambassador Kurai attended the handover ceremony of medical equipment to the Military Medical Clinical Treatment and Rehabilitation Center in Irpin. Deputy Minister of Defence Anatolii Petrenko and UNOPS Director in Ukraine Irina Sahakyan Vetter also attended the ceremony, during which the hospital received the Japanese-made stationary digital X-ray system.
This assistance is provided as part of Japan's support for those suffering in the eastern Ukraine since 2014. The equipment will be used for the examination and treatment of not only military personnel wounded in action, but also local residents, and is expected to increase the capacity of the hospital while enhancing the quality of the medical service in the region.
The project was implemented by UNOPS with the financial support of 1.7 million USD provided by the Government of Japan for medical assistance to the defense hospitals in Ukraine. A series of medical equipment has been provided to the Irpin Center as well as the Hospitals in Lviv and Kharkiv.
(Photo credit: Ministry of Defence of Ukraine, UNOPS)