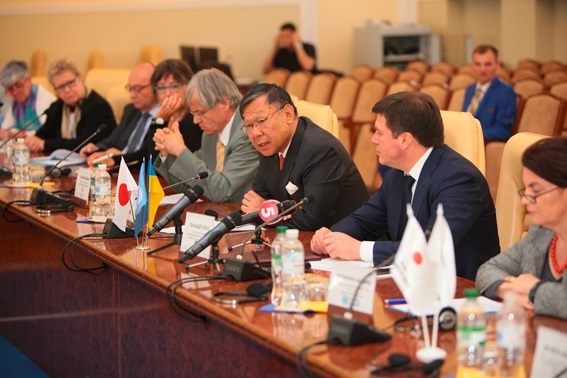 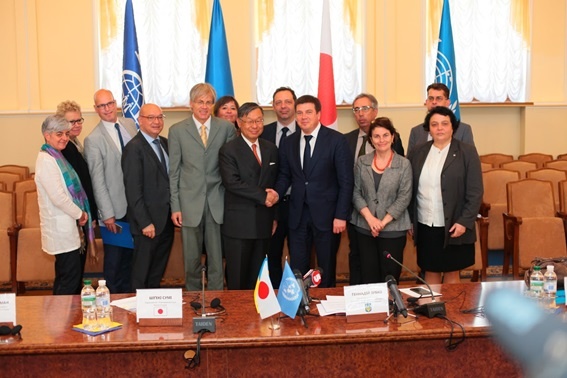 On May 26, 2016, at the premises of the Ministry of Regional Development, Ambassador Sumi together with the Vice Prime Minister of Ukraine Hennadii Zubko and representatives of UNDP (United Nations Development Program), UNICEF (United Nations Children's Fund), IOM (International Organization for Migration), UNOPS (United Nations Office for Project Services), UNHCR (United Nations High Commissioner for Refugees), WFP (World Food Program), OCHA (Office for the Coordination of Humanitarian Affairs), ICRC (International Committee of Red Cross) and IFRC (International Federation of Red Cross) gave a press briefing regarding the newly provided assistance of Japan in support of IDPs and for boosting recovery in eastern Ukraine.
This assistance of Japan, amounting to approximately USD 13.64 million, will be provided through the above-mentioned international organizations in order to ensure social stabilization and humanitarian aid, which includes relief goods for occupied territories, equipment for medical facilities and restoration of social facilities.
During the briefing Ambassador Sumi stated the following:
“It brings me great pleasure to be a part of the ceremony today for this launching of humanitarian assistance here in Ukraine.
For the Government of Japan the humanitarian conditions of the Ukrainian people both in occupied territories and Government controlled areas are always of utmost concern. In fact just last year, through the UN, Japan contributed approximately fifteen million US dollars in order to restore damaged hospitals, schools, bridges and water supply facilities in the Government controlled areas. Not too long ago, I received a letter of gratitude from a woman who fled Donetsk and is now running a shoe repair shop in Kyiv. Because of this humanitarian aid and support, this woman was able to open this shop thus being able to begin a new life for the whole family.
This year Japan has donated approximately fourteen million US dollars through various International Organizations (UNDP, UNICEF, UNOPS, UNHCR, WFP, OCHA, IOM, ICRC, and IFRC); some of the donations go to military hospitals in order to care for the war heroes—the Ukrainian soldiers who have been injured in the areas of conflict. Additionally, Japan's contribution goes towards helping vulnerable people living in the occupied territories.”
I sincerely hope that this donation will alleviate some of the ongoing afflictions of those who have become victims of foreign aggression, which has been continuing for nearly two years. Moreover, my earnest hope is that the Minsk agreement be honoured by the countries involved and that all parties in Ukraine will work together to implement this agreement. At this time there is no alternative to this agreement and as long as the people support this agreement for a peaceful resolution, the Japanese Government will continue to help those who are suffering from this conflict.