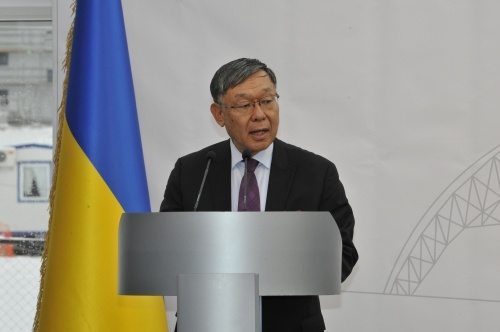 Ambassador Sumi delivering his speech on behalf of G7 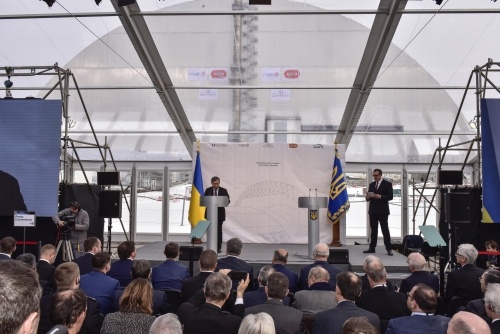 During the ceremony held near the New Safe Confinement 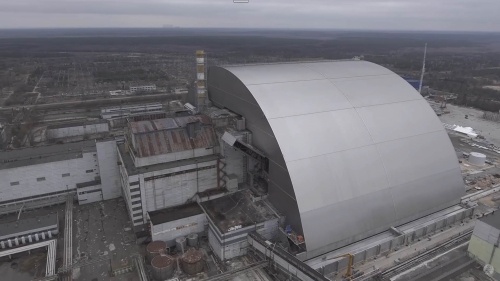 New Safe Confinement over reactor No. 4 of ChNPP

On November 29, 2016 Ambassador of Japan Shigeki Sumi participated in the completion ceremony of the Chornobyl Arch sliding organized by Novarka, the company carrying out the construction of the Chornobyl New Safe Confinement. During the ceremony, Ambassador Sumi represented Japan and also delivered a speech on behalf of G7.
As the old sarcophagus covering reactor No. 4, at which the world’s worst nuclear accident occurred 30 years ago, became old, the New Safe Confinement was built with funds provided by the international community. To mark the completion of the arch sliding over the damaged reactor an official ceremony with the participation of Ukrainian President Petro Poroshenko was held in Chornobyl.
In his speech, Ambassador Sumi, who was speaking on behalf of G7, expressed his sincere gratitude to all the sides involved and said that G7 members and the European Commission had made substantial financial contributions to the Chornobyl Shelter Fund. He stressed that the completion of the sliding of the New Safe Confinement is a significant achievement, and expressed the hope that the commissioning and operation of the facilities will be implemented in an efficient and successful manner with institutional and financial support from the Government of Ukraine.