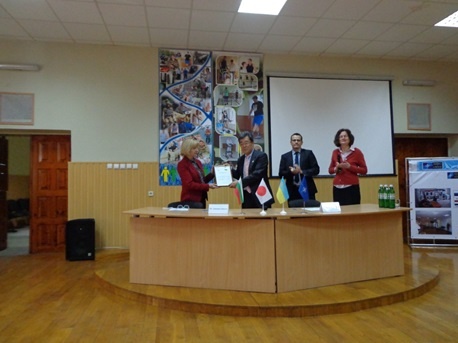 Minister-Counselor, Deputy Head of Mission Michio Harada is handing a catalogue of the procured equipment 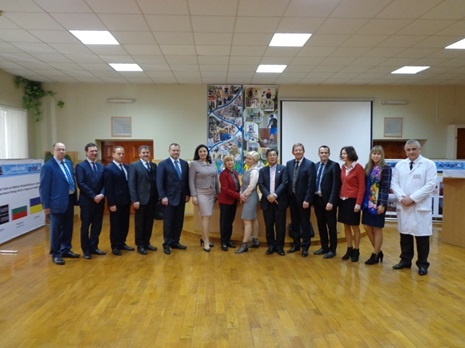 After the ceremony
(Sixth on the left – Vice Prime Minister Klympush-Tsintsadze, sixth on the right - Minister-Counselor Harada) 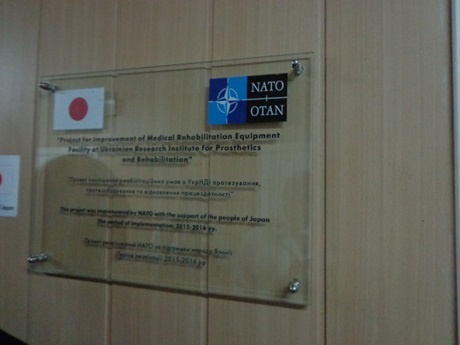 On March 31 Minister-Counselor, Deputy Head of Mission Michio Harada visited Ukrainian Research Institute for Prosthetics and Rehabilitation in Kharkiv, where the handover ceremony of the equipment procured under The Project for Improvement of Rehabilitation Facility at Ukrainian Research Institute for Prosthetics and Rehabilitation, Kusanone Human Security Programme (Cooperation of Japan with NATO) was hold. In the framework of this project, by virtue of the NATO Support and Procurement Agency a highly effective rehabilitation pool was procured for the Ukrainian Research Institute, which is the central rehabilitation facility in Ukraine.
This is the first project for Japan and NATO to cooperate in the field of assistance to Ukraine under the Kusanone Human Security Programme.
Vice Prime Minister Klympush-Tsintsadze, as well as representatives from the Institute and the press attended the ceremony.
Once the ceremony was over, the participants inspected the rehabilitation pool. There was an employee who could speak Japanese and explained the usage of the pool to the representatives of the Embassy. Many people involved into the project have expressed their gratitude to the Japanese assistance.
Link to the NATO’s official page: http://www.nato.int/cps/en/natohq/news_142768.htm?selectedLocale=en