2018/3/15
On March 15, 2018 Ambassador of Japan Shigeki Sumi visited the Ministry of Internal Affairs of Ukraine in order to hold a meeting and exchange views with Minister of Internal Affairs of Ukraine Arsen Avakov regarding the assistance provided by Japan, as well as the current situation in the country. During the meeting, Ambassador Sumi spoke about the project for provision of digital radio equipment to the Main Directorate of the National Police of Ukraine in Sumy region, which will be implemented through the United Nations Office for Project Services (UNOPS) with the financial support of Japan as part of the recovery assistance for Eastern Ukraine.  He also conveyed expectations that the equipment provided will be effectively used for anti-terrorism and security measures. In turn, Minister Avakov highly evaluated cooperation with Japan, namely the provision of Mitsubishi Outlander PHEV vehicles as patrol cars in the framework of Green Investment Scheme, as well as winter uniform for police officers provided as part of the grant aid. He noted that this new assistance is very important for ensuring security and conveyed his sincere gratitude for Japan’s support. 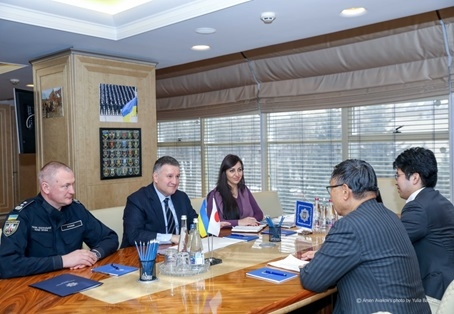