2018/5/17
On May 15-16, the Deputy Head of Mission, Minister-Counsellor of the Embassy of Japan in Ukraine Michio Harada visited Donetsk and Luhansk regions, where he laid flowers to a gravesite of Japanese prisoners of war in Druzhkivka (Donetsk region), participated in the Sakura Planting Ceremony in Rubizhne (Luhansk region) and visited the sites of projects implemented with the financial support of Japan within the framework of UNDP and UNICEF programs for the post-conflict recovery of eastern regions. Please find below a brief explanation about all the places visited.


1. Offering flowers to the gravesite of Japanese prisoners of war 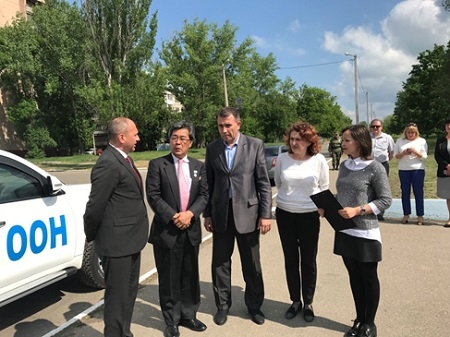 In front of the gravesite

Druzhkivska City Mayor Valerii Hnatenko explained that besides the Japanese prisoners of war there were also German and Romanian detainees, and around 110 people were buried in this particular grave. He also noted that Japanese detainees were well known among local people for their impressive diligence.
In turn, having laid the flowers, Michio Harada said that after the WWII Japan renounced the war and recovered with the support of the international community. Having such experience, it is now providing assistance to Ukraine and many other countries. 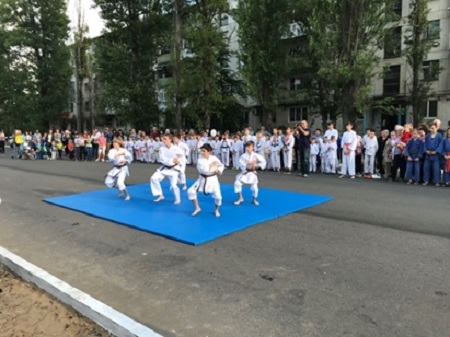 Judo and aikido demonstration by the local children 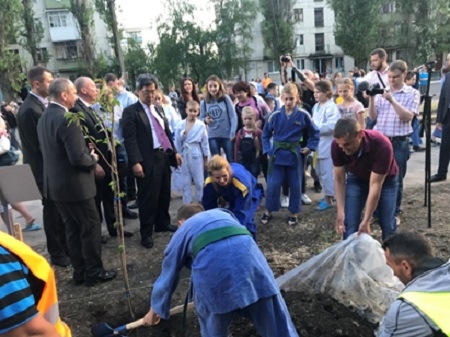 During the Sakura Planting Ceremony 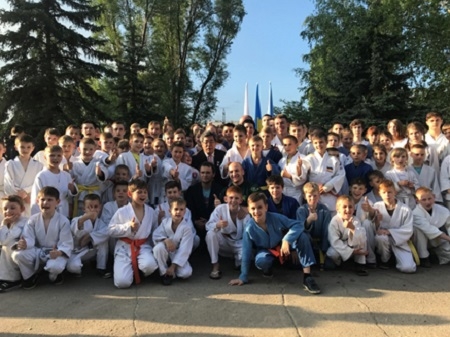 Being attended by the City Mayor Serhii Khortiv, Deputy Head of Luhansk Regional State Administration Olha Lishyk, representatives of the UNICEF and UNDP, as well as local children doing aikido and judo and around 300 citizens of Rubizhne, the Sakura Planting Ceremony became a great event for the city. Serhii Khortiv thanked Japan for its support for the reconstruction of municipal hospitals and social facilities for children with disabilities. He said that the trees planted in Rubizhne will be a symbol of friendly relations between Japan and Ukraine. In turn, Michio Harada noted that these sakura trees were purchased with the funds donated by the Japanese companies operating in Ukraine. He explained about the Japanese tradition of viewing cherry blossoms called “hanami” and expressed hopes to visit the city again in order to enjoy these beautiful flowers together.


3. Visit to a secondary school in Vrubivka 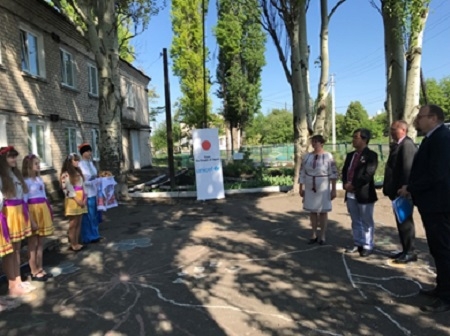 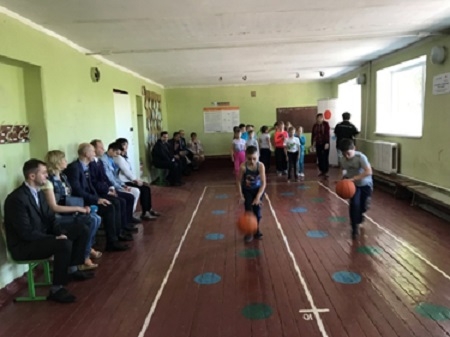 During the physical training lesson 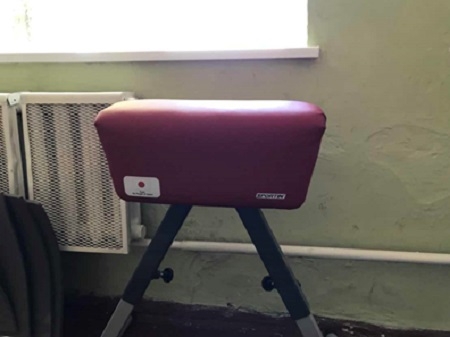 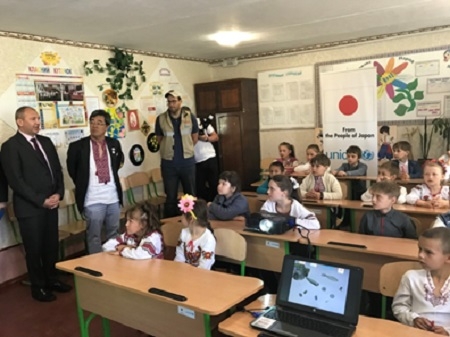 During a workshop on the risks of landmines 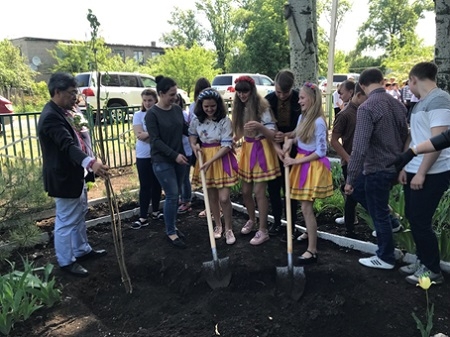 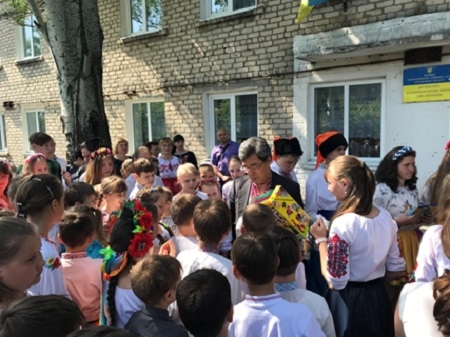 Presenting origami and postcards to children

A secondary school in Vrubivka village, Luhansk region, is located close to the contact line and experienced several incidents of heavy shelling. Focusing on the improvement of children’s educational environment and mental care, Japan has provided through UNICEF physical education equipment, tables and chairs to be used during workshops on the dangers of landmines, stress mitigation, etc. During the visit, the Japanese Embassy representatives were warmly welcomed by the schoolchildren wearing vyshyvanka. They planted sakura trees together with the children and accepted the words of gratitude and appreciation from local representatives.


4. Inauguration of a Social Development Center for children 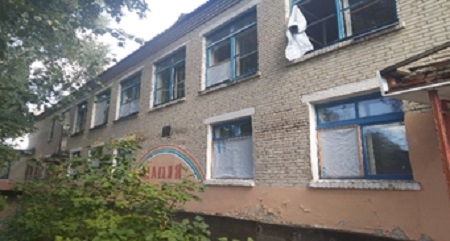 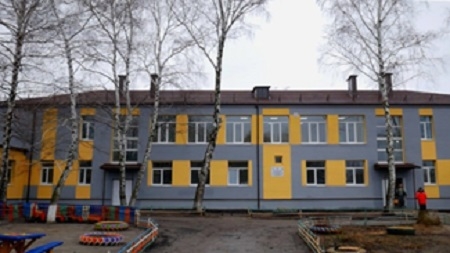 Building of the Center before and after its reconstruction 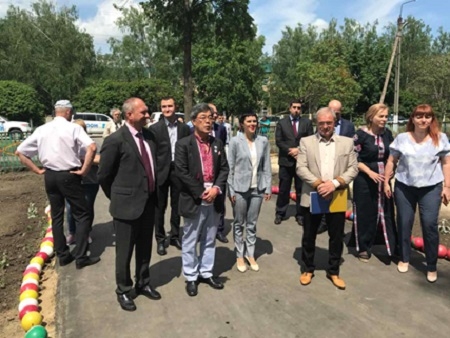 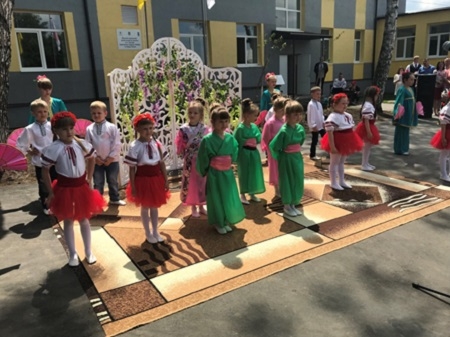 Performance by the children wearing kimono and vyshyvanka 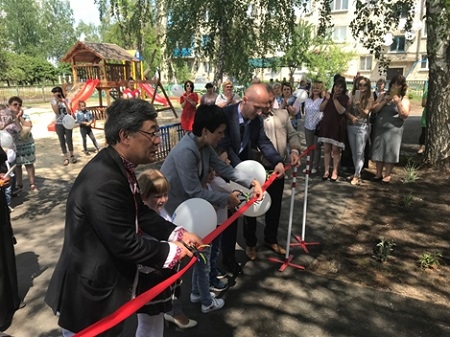 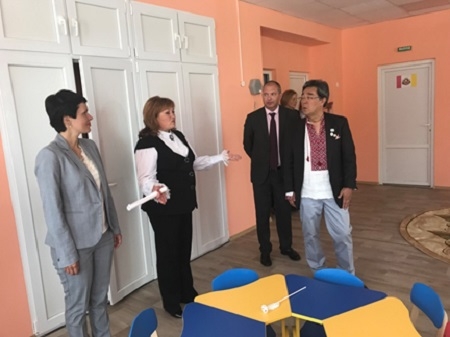 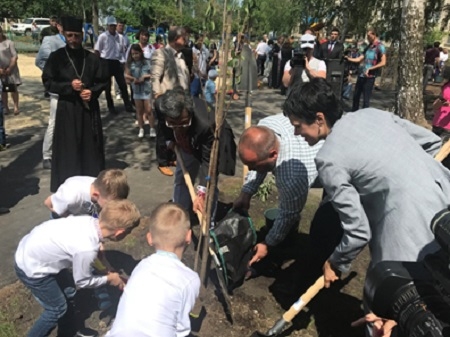 The building of a Social Development Center for Children in Svatove, Luhansk region, was heavily damaged during the conflict in eastern Ukraine, which started in 2014.  In cooperation with UNDP, Japan has provided support for the reconstruction of the building, including the replacement of windows and repair of its roof and walls. The repairs works were partially covered by the city budget.  The inauguration ceremony of the Social Development Center for Children was attended by the Svatove City Mayor Yevhen Rybalko, Deputy Head of Luhansk Regional State Administration Olha Lishyk and many local children.